An investigation by the New York State attorney general describes a culture of widespread sexual harassment and retaliation at the Batali & Bastianich Hospitality Group.,

An investigation into the once-towering Manhattan restaurant business built by the chef Mario Batali and his former partner Joe Bastianich revealed a sexualized culture so rife with harassment and retaliation that it violated state and city human rights laws, the New York State attorney general, Letitia James, announced on Friday.

As part of a settlement brokered by Ms. James’s office, the two men and Pasta Resources, the company formerly known as the Batali & Bastianich Hospitality Group, will pay a total of $600,000 to at least 20 women and men who were sexually harassed while they worked at the Manhattan restaurants Babbo, Lupa or Del Posto, which until it closed permanently in April was the crown jewel among the men’s holdings.

The investigation detailed formally what former employees had discussed on social media and in interviews: The men created a misogynistic culture where women regularly endured sexual comments, groping and kisses against their will. One manager told servers to get breast implants or make other changes in their appearance, the attorney general said. Male colleagues would tell women to get on their knees or discuss the attributes of their mouths.

Women were passed over for premier promotions in the dining room and told that “girls” couldn’t be table captains, the investigation showed. Complaints to managers were downplayed or dismissed.

“Batali and Bastianich permitted an intolerable work environment and allowed shameful behavior that is inappropriate in any setting,” Ms. James said. “Celebrity and fame does not absolve someone from following the law.”

Mr. Batali, reached via text message, said he would not comment on the settlement. 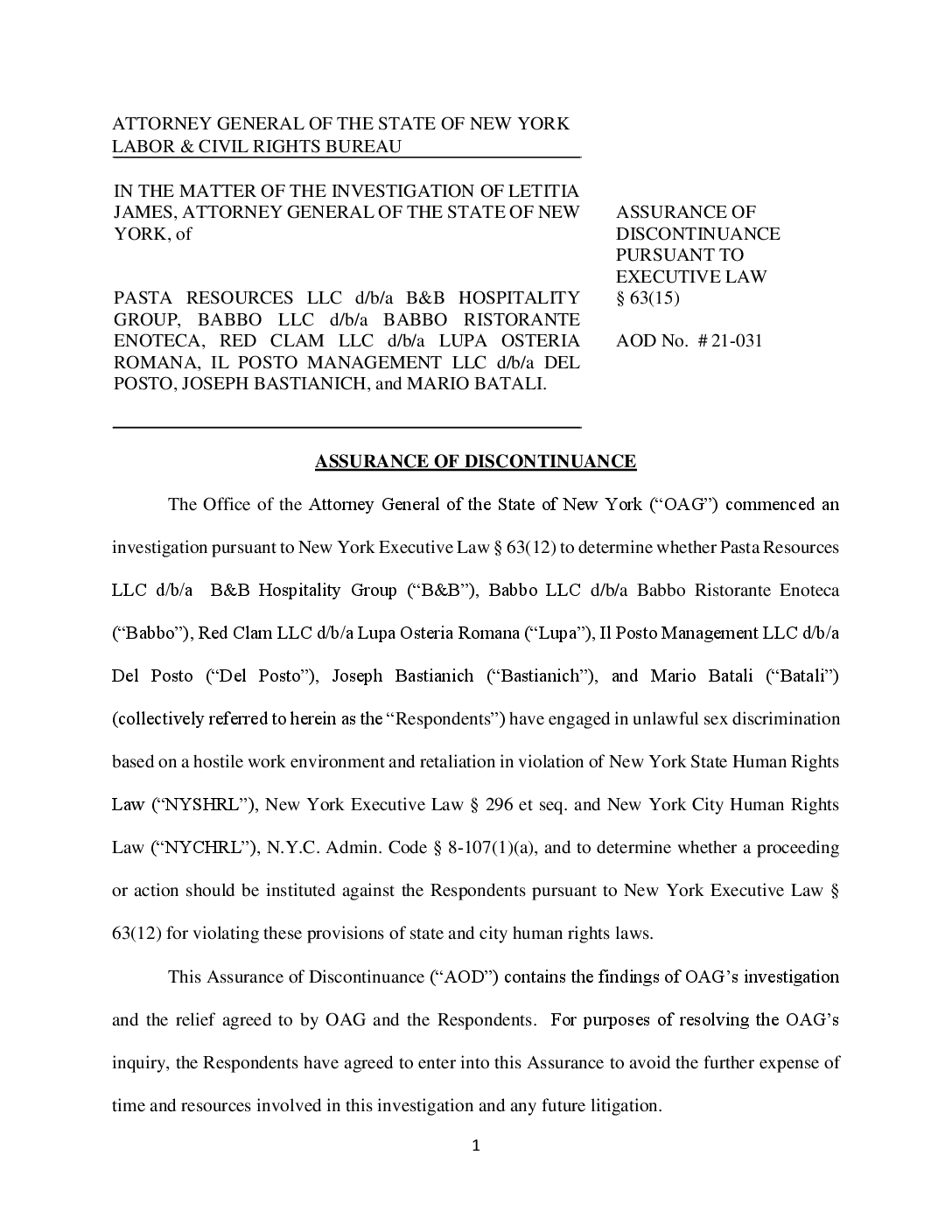 “The past few years have truly been a transformative period,” Mr. Bastianich said in a statement sent to The Times. “Including the pandemic, there have been a lot of lessons learned over the past three and a half years, and it has given us an opportunity to redefine our business and the culture we want to foster within our restaurants, emerging as the company we want to be.”

Julianna Imperati, who spent about a year as a Del Posto line cook in 2017 and 2018, was one of more than 20 sexual harassment victims interviewed by investigators. She described both witnessing and experiencing sexual harassment incidents, including being grabbed by a line cook. The general manager and the executive chef at the time made women feel as if they were asking for it and treated the incidents as rites of passage, she told investigators.

“I want every woman in the restaurant industry to know that it is not normal to be sexually harassed, assaulted or abused simply because you are a woman,” she said in a statement to The Times.

“It is not a rite of passage, and it didn’t happen because you were too friendly,” she said. “It happened because the men and women who are in power allowed it to happen.”

The investigation began in 2017, when the #MeToo movement exploded and news reports about Mario Batali’s sexually aggressive behavior began to surface.

By the end of the year, Mr. Batali had been fired from the ABC cooking and talk show “The Chew” and stepped back from the restaurants he owned with Mr. Bastianich. In 2019, Mr. Bastianich and his sister, Tanya Bastianich Manuali, purchased all of Mr. Batali’s shares in a number of jointly owned restaurants, ending a 20-year relationship between the men.

At its peak, Batali & Bastianich encompassed dozens of restaurants and food businesses in the United States, Italy, Singapore and Hong Kong. The business has been reconfigured and no longer uses that name.

Mr. Bastianich has consistently downplayed his own role in the atmosphere at the restaurants and instead focused publicly on the sexual misconduct of Mr. Batali, whose culinary fame at the time had few rivals.

Mr. Bastianich said in earlier statements that he wasn’t fully aware of Mr. Batali’s sexual aggressions but had heard him saying inappropriate things to employees.

“Though I criticized him for it from time to time, I should have done more,” he said. “I neglected my responsibilities as I turned my attention away from the restaurants.”

The attorney general’s investigation, while not citing Mr. Bastianich for specific acts of sexual harassment, casts his role in a new, harsher light and emphasizes that both men were responsible for the toxic environment.

Brianna Pintens, who started as a back waiter at Del Posto and quickly moved up to a more prominent role in the dining room, said harassment was so prevalent that female employees shared tips on the best routes to avoid catcalls as they made their way to the bathroom.

She told investigators she was harassed by a cook whose comments began as casual compliments about her appearance, escalated to repeated pressure to go on a date and culminated in a surprise bear hug that lifted her off her feet as she was about to head into work.

Ms. Pintens told a general manager, who discouraged her from telling the human resources manager about it and suggested she figure out how to deal with it on her own.

She was consoled by Melissa Rodriguez, the executive chef, and the man wasn’t at work for some time. She wasn’t sure if he was suspended or simply not scheduled to work when she was working. Within weeks, he returned to the line and acted as if nothing had ever happened between them.

“Having been in the industry for so long and having experienced some really messed-up stuff, I thought this was just another story that would get brushed under the rug and there would be no consequences,” Ms. Pintens said.

The attorney general singled out specific behavior by Mr. Batali, including an incident where he sexually harassed a woman who was serving him, then grabbed her hand and pulled it toward his genitals, and another in which he showed a pornographic video to a male waiter at Lupa who did not want to see it.

In addition to the payments, the settlement requires an overhaul of sexual harassment training and procedures at Mr. Bastianich’s restaurants and any that he or Mr. Batali might have majority ownership in during the next three years. Reports on the restaurant group’s progress must be delivered to the attorney general every six months.

Carolyn D. Richmond, an employment lawyer for Mr. Bastianich and the restaurant group, said many of the improvements in training and personnel management mandated by the attorney general had already been made.

“In particular, I believe we were the first restaurant group in New York City that put in place a 24-hour employee hotline operated by a third party,” she said.

In many ways, the agreement resembles a settlement brokered in 2020 between Ms. James and Ken Friedman, the principal owner of the Spotted Pig restaurant in Manhattan, who agreed to pay $240,000 and a share of the restaurant’s profits to 11 former employees who had accused him of sexual harassment, retaliation and discrimination.

That investigation, which began in 2018, also found that employees had endured “severe and pervasive incidents of unwanted touching and unwelcome sexual advances” by Mr. Batali, once an investor in the Spotted Pig and a frequent guest.

Mr. Friedman shut down the Spotted Pig the same month that the settlement was reached, effectively killing the profit-sharing piece of the agreement. He has paid $192,000 to the attorney general’s office, which has distributed it to the 11 women who had made the accusations. A final payment of $48,000 is due on Oct 1.

In the case of Mr. Bastianich and Mr. Batali, the attorney general’s office is still determining how many employees will receive payments and how much those payments will be. Ms. James’s office will continue to interview any former employees who believe they may have a claim.

“I’m glad that those ladies who worked for Mario are going to be financially compensated,” said Trish Nelson, one of the Spotted Pig servers who was sexually harassed by Mr. Friedman. She has offered support to one of the women as she went through the investigation into Mr. Batali and Mr. Bastianich.

In 2019, he entered a plea of not guilty to charges of indecent assault and battery of a woman who asked him for a selfie in a Boston bar in 2017. She told police he grabbed her breasts, buttocks and groin, forcibly kissed her mouth and cheeks, and suggested they head to his nearby hotel.

A trial date has not been set, but the next hearing in the case is scheduled for Sept. 15. The woman, Natali Tene, also filed a lawsuit in Suffolk County Superior Court in 2018, based on the same incident. Another woman, Alexandra Brown, filed a similar suit based on an incident with Mr. Batali during a selfie session in Boston’s Chinatown neighborhood.

The New York Police Department closed three investigations into sexual assault allegations against Mr. Batali in 2019 because detectives could not find enough evidence to make an arrest.

Anthony Gonzalez, a Republican Who Voted to Impeach Trump, Won’t Run in 2022