Demonstrations and a deadly crackdown have roiled the nation since a Feb. 1 coup brought back full military rule following years of quasi-democracy.,

Unrest has gripped Myanmar. Peaceful pro-democracy street demonstrations and work stoppages have given way to paramilitary operations in opposition to the country’s ruthless military, which seized power in a coup d’etat on Feb. 1.

Military leaders’ initially restrained response to the first waves of protests, civil disobedience and general strikes has grown more forceful over time, escalating into a brutal effort to put down the movement that has so far left thousands injured and more than 420 dead. Many of those killed have been young protesters, their lives ended with a single gunshot to the head.

The coup returned the country to full military rule after a short span of quasi-democracy that began in 2011, when the military, which had been in power since 1962, implemented parliamentary elections and other reforms. In the weeks since the coup, Daw Aung San Suu Kyi, the country’s ousted civilian leader, has faced charges in a secret court.

What led to the military coup in Myanmar?

Parliament was scheduled to hold its first session since the country’s Nov. 8 elections, in which the National League for Democracy, Myanmar’s leading civilian party, won 83 percent of the body’s available seats.

The military refused to accept the results of the vote, which was widely seen as a referendum on the popularity of Ms. Aung San Suu Kyi. As head of the National League for Democracy, she had been the de facto civilian leader since her election in 2015.

The new Parliament was expected to endorse the election results and approve the next government.

The possibility of the coup emerged after the military, which had tried in the country’s Supreme Court to argue that the election results were fraudulent, threatened to “take action” and surrounded the houses of Parliament with soldiers.

How was the coup carried out?

The military detained the leaders of the National League for Democracy and other civilian officials, including Ms. Aung San Suu Kyi and President U Win Myint, cabinet ministers, the chief ministers of several regions, opposition politicians, writers and activists.

The coup was effectively announced on the military-owned Myawaddy TV station when a news presenter cited the 2008 Constitution, which allows the military to declare a national emergency. The state of emergency, he said, will remain in place for one year. 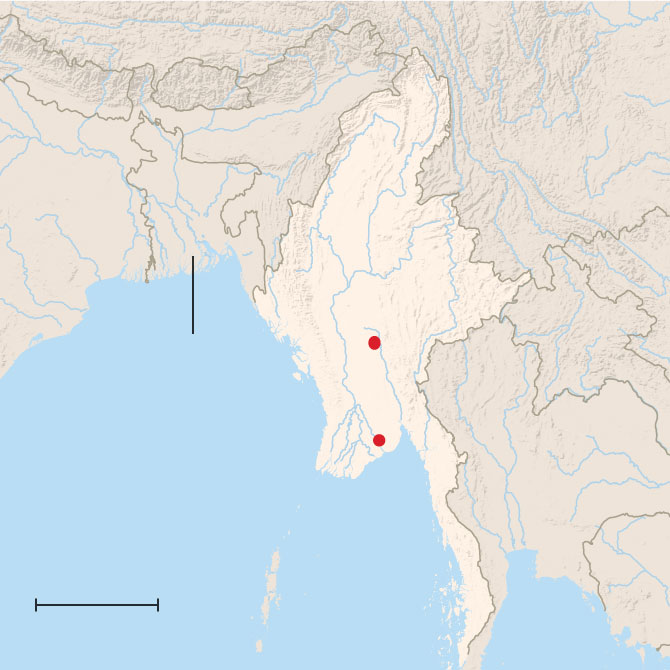 The military quickly seized control of the country’s infrastructure, suspending most television broadcasts and canceling domestic and international flights.

Telephone and internet access was suspended in major cities. The stock market and commercial banks were closed, and long lines were seen outside A.T.M.s in some places. In Yangon, the country’s largest city and former capital, residents ran to markets to stock up on food and other supplies.

How are people protesting and what has been the military’s response?

Weeks of relatively peaceful protests quickly turned deadly on Feb. 20 when two unarmed protesters were killed by security forces in Mandalay, one of whom was a 16-year-old boy.

The deaths preceded a general strike on Feb. 22, when millions of people across the country took to the streets.

Since then, an expanded civil disobedience movement has paralyzed the banking system and made it difficult for the military to get much done.

As the demonstrations entered their second month, the military, notorious for having crushed democracy movements in 1988 and 2007 by shooting peaceful protesters, became more violent in its response.

Week after week, the armed forces have escalated their attacks on the demonstrators. Including the toll from the bloodiest day of the crackdown to date, on March 27, the military has killed more than 420 people and assaulted, detained or tortured thousands of others, according to a monitoring group.

What led protesters to take up arms?

After weeks of peaceful protests, the front line of Myanmar’s resistance is mobilizing into a kind of guerrilla force. In the cities, protesters have built barricades to protect neighborhoods from military incursions and learned how to make smoke bombs on the internet. In the forests, they are training in basic warfare techniques and plotting to sabotage military-linked facilities.

The boldness and desperation of this new armed front recalls the radicalization of a previous generation of democracy activists in Myanmar, who traded treatises on political philosophy for guns. As in the past, the hard-line opposition is a defensive response to the military’s mounting reign of terror.

But there is a growing recognition that such efforts may not be enough — that the Tatmadaw, as the Myanmar military is known, needs to be countered on its own terms. In the country’s jungles, protesters are training with firearms and hand grenades.

In March, remnants of the ousted Parliament, who consider themselves the legitimate government, said that a “revolution” was needed to save the country. They have called for the formation of a federal army.

Who is Aung San Suu Kyi?

Her ascension to leadership was seen as a critical moment in the transition of Myanmar, formerly known as Burma, to democracy from military dictatorship. Ms. Aung San Suu Kyi, the daughter of the country’s independence hero Gen. Aung San, spent more than 15 years under house arrest.

Her time in detention made her an international icon, and she was awarded the Nobel Peace Prize in 1991.

After she was released from house arrest in 2010, her reputation was tarnished by her cooperation with the military and her vociferous defense of the country’s deadly campaign against the Rohingya, a Muslim ethnic minority group. In 2019, she represented Myanmar at a trial in the International Court of Justice, at which she defended it against accusations of ethnic cleansing.

Many believed Ms. Aung San Suu Kyi’s cooperation with the military was a pragmatic move that would hasten the evolution to full democracy, but her detention since the coup appeared to prove the lie in the military’s commitment to democracy.

Why is Aung San Suu Kyi on trial?

A secret trial for Ms. Aung San Suu Kyi and Mr. Win Myint, the deposed president, began on Feb. 16. They face obscure charges that could land them in prison for six years and three years, respectively.

Ms. Aung San Suu Kyi was accused of violating import restrictions after walkie-talkies and other foreign equipment were found in her villa compound. She was also charged with contravening a natural disaster management law by interacting with a crowd during the coronavirus pandemic, a charge that had not been disclosed publicly before.

Mr. Win Myint has been charged with breaching the natural disaster restrictions.

After the coup, the military handed power to the army chief, Senior Gen. Min Aung Hlaing.

The move prolongs the general’s power even though he is supposed to age out as army chief this summer. His patronage network, centered on lucrative family businesses, could well have been undermined by his retirement, especially had he not been able to secure a clean exit.

Under the former power-sharing agreement, General Min Aung Hlaing presided over two business conglomerates and was able to appoint three key cabinet members who oversee the police and border guards.

The military never fell under the civilian government’s control. In recent years, the army, with General Min Aung Hlaing at the helm, has overseen campaigns against several of the country’s ethnic minority groups, including the Rohingya, the Shan and the Kokang.

What has been the international reaction?

Several major world leaders quickly condemned the coup, demanding that Myanmar’s military immediately free Ms. Aung San Suu Kyi and the other detained government officials and honor the November election results. But it was not immediately clear what sort of concrete actions, if any, other nations might take.

The Biden administration, which has sought to elevate human rights as a foreign policy priority, announced sanctions in late March in coordination with the European Union that named military officials and other entities in Myanmar for their violence against democracy advocates.

Antonio Guterres, the United Nations secretary general, said the coup developments “represent a serious blow to democratic reforms in Myanmar.” And Prime Minister Boris Johnson of Britain said in a Twitter post that the “vote of the people must be respected and civilian leaders released.” The U.S. ambassador to Myanmar, Thomas Vajda, called the bloodshed across the country on March 27 “horrifying.”

“We strongly condemn the escalating violence against protests in Myanmar and call on the military to immediately halt the use of force against peaceful protesters,” said Ravina Shamdasani, a spokeswoman with the United Nations human rights office.

China, which shares a 1,300-mile border with Myanmar and is one of the country’s largest investors, has responded cautiously, having cultivated cordial relations with both Ms. Aung San Suu Kyi and the military hierarchy that detained her.

“China and Myanmar are friendly neighbors. We hope that all parties will properly handle their differences under the Constitution and legal framework to maintain political and social stability,” Wang Wenbin, a Foreign Ministry spokesman, said in Beijing on Feb. 22, the day of the general strike.

Myanmar was the first stop of a regional good-will tour in January by China’s foreign minister, Wang Yi, who pledged to furnish free Chinese-made coronavirus vaccines to Myanmar.