President Biden to Meet With Key Democrats Over $3.5 Trillion Bill

We are enjoying an overwhelmingly “no” vote tonight here in the state of California. But “no” is not the only thing that was expressed tonight. I want to focus on what we said yes to as a state. We said yes to science. We said yes to vaccines. We said yes to ending this pandemic. We said yes to people’s right to vote without fear of fake fraud or voter suppression. We said yes to women’s fundamental constitutional right to decide for herself what she does with her body, her fate and future. And so I’m humbled and grateful to the millions and millions of Californians that exercise their fundamental right to vote and express themselves so overwhelmingly by rejecting the division, by rejecting the cynicism, by rejecting so much of the negativity that’s defined our politics in this country over the course of so many years. I just want to say this, tonight I’m humbled, grateful, but resolved in the spirit of my political hero, Robert Kennedy, to make more gentle the life of this world. Thank you all very much. And thank you to 40 million Americans, 40 million Californians, thank you for rejecting this recall. 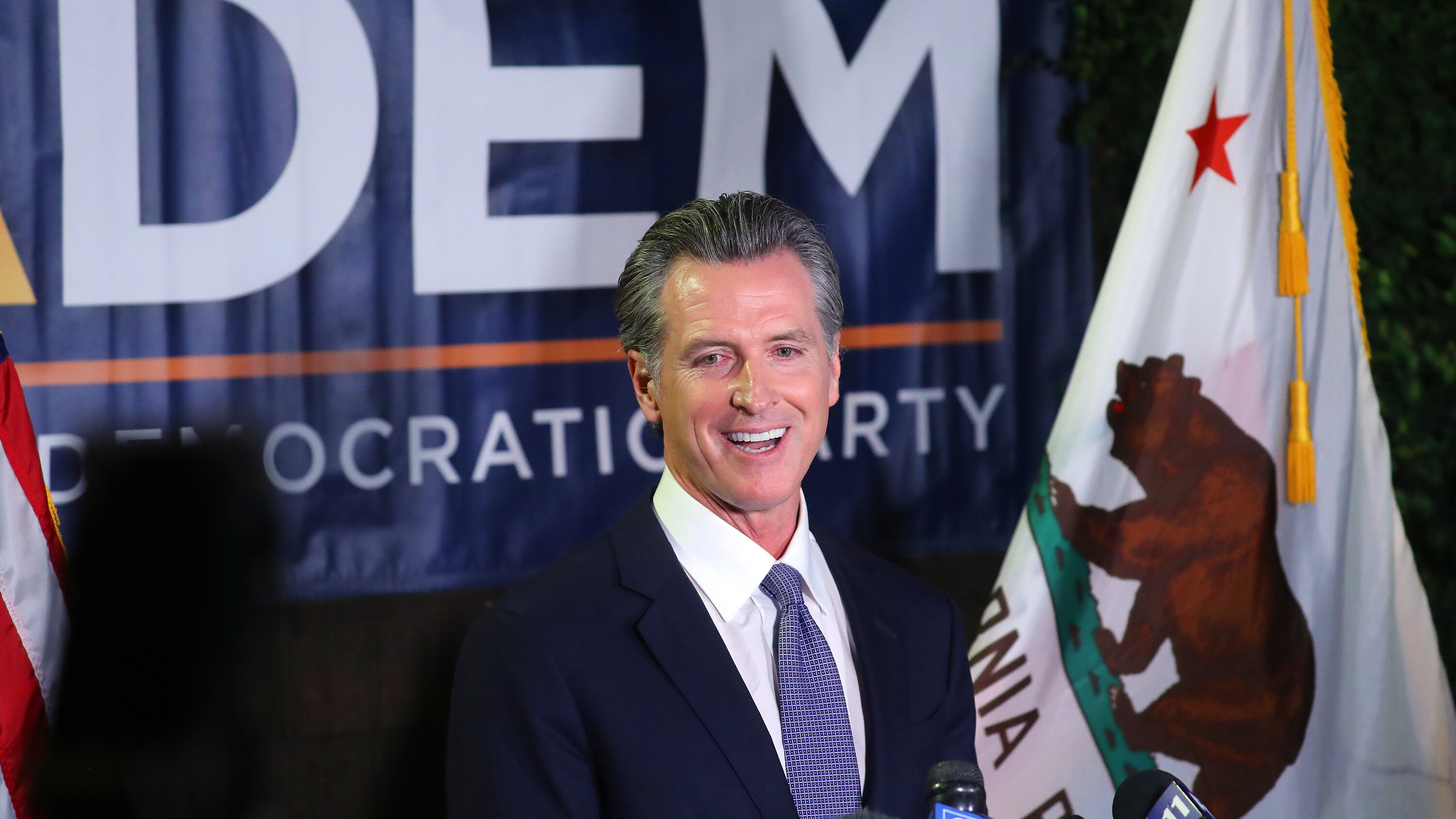 Gov. Gavin Newsom’s five-minute victory speech came not to a crowd of cheering supporters like the one he addressed with President Biden Monday night in Long Beach, but to a group of reporters gathered in Sacramento.

He dispensed with the typical laundry list of thanks to key political allies and instead sought to frame the entire recall campaign as the latest battle in a broader fight against the forces aligned with former President Donald J. Trump.

“Democracy is not a football, you don’t throw it around,” Mr. Newsom said. “It’s more like an antique vase. You can drop it, smash it into a million different pieces. And that’s what we’re capable of doing if we don’t stand up and meet the moment and push it back.”

Mr. Newsom’s triumph over the recall, he essentially said, was less a cause for celebration than it was an excuse to exhale. A California campaign that Democrats framed as one between the science of the pandemic, multicultural democracy and abortion rights didn’t leave the governor with much room for a victory lap.

The issues he mentioned at the beginning of his speech — promoting vaccines, diversity and women’s rights — are reflected in much of California’s current policy. This wasn’t a campaign Mr. Newsom ran with a platform of moving the state forward; it was a continuation of his warning that if Republicans take control, they would usher in a dystopian, Trump-inspired wasteland.

“We may have defeated Trump, but Trumpism is not dead in this country,” Mr. Newsom said. “The Big Lie, the Jan. 6 insurrection, all the voting suppression efforts that are happening all across this country, what’s happening with the assault on fundamental rights, constitutional rights of women and girls, it’s a remarkable moment in our nation’s history.”

In California, where Democrats outnumber Republicans nearly two to one, this message was more than enough to carry the day, with a blowout margin that mirrored the 2020 presidential election result in the state.

The coronavirus pandemic helped propel the recall attempt of Gov. Gavin Newsom to the ballot in California, and on Tuesday, his handling of the pandemic was an overriding issue as about two-thirds of voters decided he should stay in office.

Across the nation’s most populous state, voters surveyed by New York Times reporters outside polling places cited Mr. Newsom‘s pandemic restrictions and support for vaccine mandates as key factors in whether they voted to oust or keep him. The recall served as a preview of next year’s midterm elections nationally, with voters sharply divided along partisan lines over issues such as masks, lockdowns and mandatory vaccinations.

In San Francisco, Jose Orbeta said he voted to keep Mr. Newsom, a Democrat, in office, calling the recall a “waste of time.”

“It’s a power grab by the G.O.P.,” said Mr. Orbeta, a 50-year-old employee of the Department of Public Health. He said Mr. Newsom had done a “decent job” leading California through the pandemic despite his “lapse of judgment” in dining at the French Laundry during the height of the outbreak.

In Yorba Linda, a conservative suburb in Orange County, Jose Zenon, a Republican who runs an event-planning business with his wife, said he was infuriated by Mr. Newsom’s pandemic restrictions and support for vaccine mandates. He pointed to examples of his friends leaving for other states, such as Arizona, Nevada and Texas.

“That train out of here is really long, and we might be getting on it, too,” Mr. Zenon said, just after voting for Larry Elder, the Republican talk-radio host who led the field of challengers hoping to take Mr. Newsom’s job.

“The rules this governor made put a lot of businesses in an impossible position — we were without income for 10 months. Here we live in a condo, we want to have a home, but it’s just impossible. Something’s got to change.”

Some voters in an increasingly politically active constituency of Chinese Americans supported the recall. They blamed Mr. Newsom for a rise in marijuana dispensaries, homeless people and crime that they said are ruining the cluster of cities east of Los Angeles where Chinese immigrants, many of them now American citizens, have thrived for years.

“We really don’t like the situation in California,” said Fenglan Liu, 53, who immigrated to the United States from mainland China 21 years ago and helped mobilize volunteers in the San Gabriel Valley.

“No place is safe; crime is terrible. Newsom needs to go. This is failed management, not the pandemic.”

In the wealthy Orange County suburb of Ladera Ranch, Candice Carvalho, 42, cast her ballot against the recall because, she said, “I thought it was important to show that Orange County isn’t just Republicans.”

She expressed frustration that the recall was taking so much attention at a critical moment in the pandemic.

“It was a waste of money and completely unnecessary,” she said. “And I’m a little shocked we’re focusing on this now.” While she acknowledged knowing little about the specifics of state election laws, she said it seemed “slightly too easy” to get the recall attempt on the ballot.

A report released on Tuesday that examined poverty in the United States has invited comparisons of the effectiveness of government stimulus in response to the two most recent economic emergencies: the 2009 financial crisis and the 2020 coronavirus pandemic.

Despite the pandemic, the share of people living in poverty in the United States fell to a record low last year — a finding that economists and policymakers across the political spectrum have hailed as a sign that the emergency stimulus program worked.

Robert Reich, the Berkeley economics professor who served as labor secretary under President Clinton, tweeted that the data proved government aid was effective in fighting poverty. Douglas Holtz-Eakin, head of the conservative American Action Forum and a former adviser to Senator John McCain, told the DealBook newsletter that the recent stimulus was “the best policy response to a recession the U.S. has ever seen.”

But there is still room for interpretation. According to the report, a measure of the poverty rate that accounts for the impact of government programs fell to 9.1 percent of the population last year, from 11.8 percent in 2019. But the official rate, which was devised in 1963 by a Polish immigrant and Social Security administrator, Mollie Orshansky, is based almost entirely on the cost of food and leaves out some major aid programs, rose last year to 11.4 percent. (The difference between poverty measures was once a plotline in “The West Wing.”)

So, was the pandemic stimulus the “best” emergency response? One thing it has going for it is a seemingly flattering comparison to the government’s efforts in the financial crisis in 2009.

As David Leonhardt of The Morning newsletter recently wrote, President Obama’s 2009 economic aid package has long been seen as a failure, even though the economy began growing again within a few months of its passage and it likely helped stave off an even deeper downturn. Government benefits and tax changes lifted 53 million Americans out of poverty last year, more in absolute and relative terms than in 2009, according to calculations from the liberal-leaning Center on Budget and Policy Priorities.

But consider the other side of the ledger. In 2009, the government spent $810 billion on its stimulus. Last year’s increase in government aid was some $1.8 trillion. That translates, very roughly, to around $35,000 per person lifted out of poverty versus $20,000 in 2009, though not all the money in either package went to lower-income Americans.

The debate over cost and efficiency will influence whether the government should spend trillions more, as President Biden and many Democrats now want, to fund more permanent government aid programs. Detractors, including many Republicans, can point to data showing a seeming drop in the benefit per dollar spent as a reason to be cautious.

But Arloc Sherman, an economist at the Center for Budget and Policy Priorities, said spending now could save money later.

“I would not say the 2020 stimulus was a less effective stimulus,” he said. “But it could have been more efficient and effective if we had a comprehensive and well-designed security system in the first place.”

Representative Alexandria Ocasio-Cortez of New York arrived at the Met Gala on Monday evening dressed in a custom Brother Vellies ivory wool jacket dress with an organza flounce and the message “Tax the Rich” emblazoned in red across her back.

Designers and corporate sponsors generally pay the hefty price of admission — $35,000 a ticket, or $200,000 to $300,000 a table — for the gala’s guests, who typically include a quorum of Kardashians, Hollywood A-listers and supermodels. The star-studded event is often referred to as the Oscars of fashion.

Many New York City elected officials are invited as well, as “guests of the museum” who do not pay to attend.

Regardless, Representative Ocasio-Cortez’s attendance — and dress — provided easy fodder for her most reliably triggered critics. On Twitter, Donald Trump Jr., the former president’s eldest son, tagged her as a fraud for sending a message about taxing the rich “while she’s hanging out with a bunch of wealthy leftwing elites.”

More surprising was the criticism Ms. Ocasio-Cortez, a Democrat, generated from the left — a chorus of dissatisfaction from progressives and self-described socialists disappointed by a gesture they said caricatured a progressive cause and underscored their sense that she is not maximizing her ability to fight for working people from Congress.

“To walk into a space that’s about art, fashion, luxury and wealth and say, ‘Here is the conversation we have to confront, but I’m going to confront it in the vernacular of the event,’ is brilliant,” Ms. Wiley said.

How Can New York City Prepare for the Next Ida? Here’s a To-Do List.