W.H.O. and Critics Look at What’s Next to Investigate Virus Origins

A scientific mission to China proposed further study for a number of topics. Critics and the director of the W.H.O. have weighed in as well.,

The joint international and Chinese mission organized by the World Health Organization on the origins of Covid released its report last week suggesting that for almost every topic it covered, more study was needed. What kind of study and who will do it is the question.

The report suggested pursuing multiple lines of inquiry, focused on the likely origin of the coronavirus in bats. It concluded that the most likely route to humans was through an intermediate animal, perhaps at a wildlife farm. Among future efforts could be surveys of blood banks to look for cases that could have appeared before December 2019 and tracking down potential animal sources of the virus in wildlife farms, the team proposed.

Critics of the report have sought more consideration of the possibility that a laboratory incident in Wuhan could have led to the first human infection. A loosely organized group of scientists and others who have been meeting virtually to discuss the possibility of a lab leak released an open letter this week, detailing several ways to conduct a thorough investigation. It called for further action, arguing that “critical records and biological samples that could provide essential insights into pandemic origins remain inaccessible.”

Much of the letter echoes an earlier release from the same group detailing what it saw as the failures of the W.H.O. mission. This second letter is more specific in the kind of future investigations it proposes.

The group is seeking a new inquiry that would include biosecurity and biosafety experts, one that could involve the W.H.O. or a separate multination effort to set up a different process to explore the beginnings of the pandemic and its origins in China.

Jamie Metzl, an author, senior fellow of the Atlantic Council, an international policy think tank and signer of the scientists’ letter, said the renewed calls for a more thorough investigation reflected the need for greater monitoring of and restrictions on what viruses can be studied in labs around the world.

“This is not about ganging up on China,” Mr. Metzl said.

Mr. Metzl’s group was among those disappointed by the report issued last week, as it dismissed out of hand the possibility of a leak from the Wuhan Institute of Virology, calling it extremely unlikely. 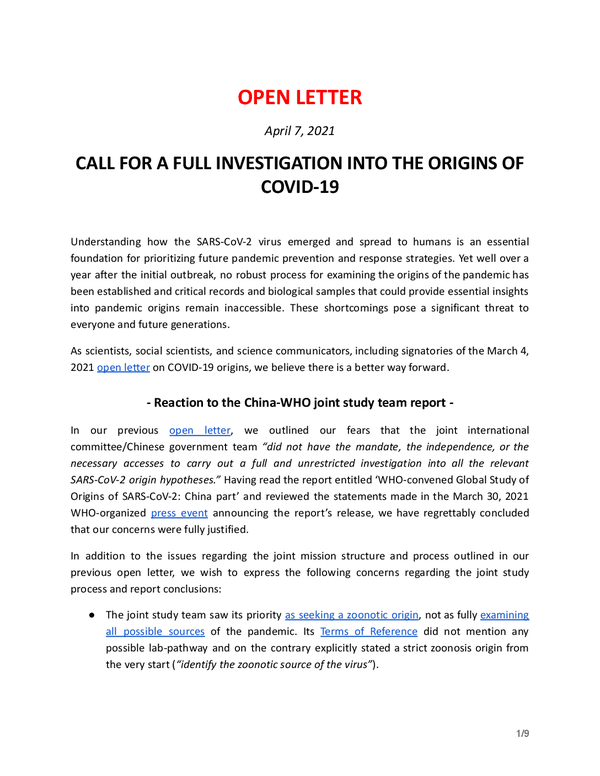 In addition to outside calls for new inquiries, the W.H.O. team of scientists also suggested pursuit of other avenues including reviews of samples from blood banks.

The head of the W.H.O., Dr. Tedros Adhanom Ghebreyesus, said later that the mission’s consideration of a possible lab leak was not “extensive enough.”

He continued, “Although the team has concluded that a laboratory leak is the least likely hypothesis, this requires further investigation, potentially with additional missions involving specialist experts, which I am ready to deploy.”

From the start, the task of the mission was never to investigate security or procedures at the Wuhan lab, where a great deal of research has been done on bat coronaviruses in recent years, or at any other labs in China.

What the member nations of the W.H.O. authorized was a collaborative scientific effort by a group of international experts and their Chinese counterparts to study the origins of the pandemic.

The team of international scientists had no power or mandate to act independently of their Chinese colleagues. As the member nations dictated, every word in the report had to be approved by both the Chinese and the international group. They had 28 days in China, two weeks of which were in quarantine in a hotel.

The result, which includes an extensive review of existing scientific literature, marshals evidence in favor of the mainstream understanding of the virus’s origins, which is that a bat coronavirus most likely passed it to another animal and then to humans. This is what happened with the earlier coronavirus epidemics of SARS and MERS.

Similar viruses have been found in bats and pangolins, although not close enough to have themselves spilled over into humans. The suspicion of a lab leak is built on the notion that labs in China do collect and study these viruses and that the Chinese scientists are lying about the research they do or are unaware of what goes on in their institutions.

Shi Zhengli, the director of the Wuhan Institute of Virology, and other internationally known Chinese scientists have said that SARS-CoV-2 was not present in any Chinese labs. Nor was any virus close enough to it to make a leap to people, they have said.

Some experts who did not sign either open letter criticizing the W.H.O. think a different kind of investigation is needed.

Dr. Daniel Lucey, an infectious disease expert at Georgetown University, said he thought on the basis of the genetics of the virus and the many established precedents of disease spillovers from animals to people that the virus originated in nature. But he also said he thought it was possible that it might have been present in a lab in Wuhan and escaped to start the pandemic, perhaps because someone was accidentally infected.

He said that over all, on the question of viral origins, “I’m really not convinced that it came from a lab, but there’s not enough investigation.”

He said he thought the report amounted to a “grand slam home run” for China. What China wants, he said, “is to create reasonable doubt that the virus started in China.” And, he said, the report suggests that it is possible the virus originated in other countries in Southeast Asia, and perhaps even Europe.

Jesse Bloom, an evolutionary biologist at the Fred Hutchinson Cancer Research Center in Seattle, who did not sign either critical letter, said that he did not see evidence in the report to back a dismissal of the possible role of a laboratory.

“I think that natural origins of the pandemic are completely plausible,” Dr. Bloom said, but added that he agreed with Dr. Tedros that the assessment of a lab accident was not extensive enough and requires further investigation.

Apart from the lab, the report mentions several promising directions for future study, including tracing the path of animal products or animals that could have carried the virus to markets in Wuhan.

Peter Daszak, the head of EcoHealth Alliance, who has been lambasted by lab leak theorists for his previous work with the Wuhan Institute of Virology, said the findings so far pointed to wild animal farms as the most likely locales for the spillover from animals to people. There are many such farms in China and Southeast Asia, and the animals on them, like raccoon dogs and civets, have contact with both bats and people. Thousands of tests of animals and animal samples from China, including at seafood and other markets, have yielded no evidence of the presence of SARS-CoV-2, according to the W.H.O. report.

The report also mentions that both mink and cats have proved easily susceptible to infection, presumably from humans, and are potential reservoirs of the virus. Cats have not been shown to pass the virus on to humans, but mink have. China has a thriving mink industry but has not reported any mink farm infections to the W.H.O.

Dr. Lucey said he referred to the lack of information about China’s mink farms as “The Silence of the Mink.”

As to human studies, the report suggests that testing blood in blood bank donations made from September to December 2019 could be very useful. The first recorded outbreak occurred in the Huanan Market in Wuhan in December 2019.

Marion Koopmans, a Dutch virologist at Erasmus University in Rotterdam, said that the W.H.O. mission had asked the Wuhan blood bank system to hang on to donated blood from that time period. That was agreed to, she said, and now the Chinese are seeking permission to test the blood for antibodies to the virus that could help to pin down exactly when the virus first appeared in humans. If such studies were extended, it could help with location as well.

Dr. Koopmans said that she hoped studies of blood donations could be extended to other provinces and regions outside of China. “My perfect study design would be that you include regions in Italy and France where there were possible indications of the presence of the virus before December,” she said.

She said that standardized tests should be done for all regions in question. That in turn might point to isolated pockets of early appearances of the virus. Wildlife tests in such areas might be productive.

Dr. Koopmans defended the W.H.O. team’s mission, saying it was always intended to be a scientific study with Chinese colleagues. If an investigation is the goal, she said, “you need to do an inspection or something, but that’s not a scientific study.”

On that the critics agree. One of the most telling sections of the letter from W.H.O. critics is about the composition of a team investigating Chinese labs. If the ground rules for a second mission are rewritten, the letter says, the W.H.O. should “ensure the incorporation of a wider skill-set in the international experts team, including biosafety and biosecurity experts, biodata analysts and experienced forensic investigators.”

Almost at the very end of the report, in discussing what should be done to learn more about the likelihood of a laboratory incident, the report recommends: “Regular administrative and internal review of high-level biosafety laboratories worldwide. Follow-up of new evidence supplied around possible laboratory leaks.”

Mr. Metzl said he couldn’t agree more and said that in the future, such review should include U.S. labs. But, he said, the pandemic is of utmost urgency and he wants to start right away with China. Still, he and the other signers of the two letters, he said, are highly concerned with virus research around the world.

Whereas many virologists and disease specialists want to collect and study viruses as a way to learn more and be more prepared for outbreaks, Mr. Metzl said he and others wanted more restrictions on virus studies.

Voting Rights Bill Is Blocked in the Senate