Despite a 2016 peace deal with the FARC, Colombia’s long internal conflict continues. Seldom has that been as evident as this month, when the government bombed a rebel camp full of young people.,

PUERTO CACHICAMO, Colombia — At 13, she left home to join the guerrillas. Now, at 15, Yeimi Sofia Vega lay in a coffin, killed during a military operation ordered by her government.

Some of the youngest children in her town, Puerto Cachicamo, led her funeral procession, waving small white flags as they wound past the school, with its mildewed books and broken benches, past the shuttered health clinic and their small wooden houses.

“We don’t want bombs,” the children chanted, marching down a dusty road to the cemetery. “We want opportunities.”

Nearly five years after Colombia signed a historic peace accord with its largest rebel group, the Revolutionary Armed Forces of Colombia, the country’s internal war is far from over.

Remote towns like Puerto Cachicamo have yet to see the schools, clinics and jobs the government promised in the agreement. Thousands of dissident FARC combatants have returned to battle, or never laid down their arms, and are fighting rivals for control of illicit markets. Mass killings and forced displacement are again regular occurrences.

And young people — trapped between an often absent state, the aggressive recruitment of armed groups and the firepower of the military — are once again the conflict’s most vulnerable targets.

That was evident this month, when the government bombed a rebel camp in an effort to take out a high-profile dissident FARC leader known by the alias Gentil Duarte. The camp turned out to be full of young people who had been recruited by the group — and the operation killed at least two minors, including Yeimi Sofia.

The defense minister, Diego Molano, blamed the rebels for the deaths, pointing out that they were the ones turning adolescents into government targets by converting them into “machines of war.”

The phrase electrified Colombian society, with some saying Mr. Molano was being blunt but precise, and others saying it was this rhetoric — characterizing poor children as enemies of the state, instead of victims of its neglect — that was once again driving young people to the guerrillas.

Child recruitment was a common feature of the country’s decades-long war. Now, rebels are at it again, circling town plazas, hanging recruitment posters, passing money to adolescents, charming the girls, then convincing them to join the fight.

The bombing also raised critical questions of accountability in a country still grappling with atrocities committed by all sides during a conflict that left at least 220,000 dead: Did authorities know there were minors at the camp? Was the attack launched anyway? 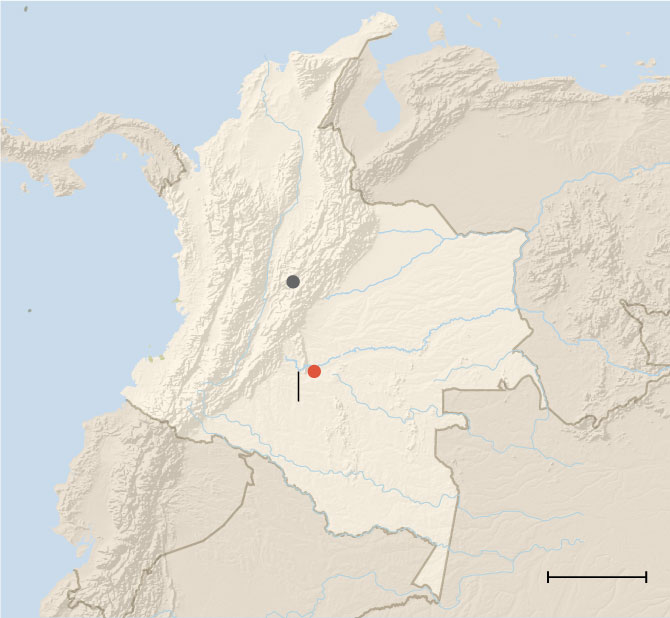 Yeimi Sofia’s hometown, Puerto Cachicamo, sits on the Guayabero River, at the intersection of the Andes Mountains, the Amazon region, and the country’s vast plains. One of its defining characteristics is the near total absence of the state.

Cell service never arrived. The school, run by a nongovernmental organization, only goes to the 10th grade. The health clinic closed when its only nurse left amid the pandemic. The nearest city is four hours away on a dirt road so craggy that even the most rugged cars are often trapped in its muddy jaws. A ride out can cost nearly a month’s salary.

Many people are dairy farmers; some grow or pick coca, the base product in cocaine, one of the few profitable crops in the remote region.

“We are the peons of narcotrafficking,” said one farmer.

There is no police station, and many residents say their most memorable experiences with the state are their encounters with its soldiers, who arrive periodically to eradicate the coca crops or fight the rebels. On several occasions these encounters have ended with ruined livelihoods and injured civilians.

Before the peace deal, the FARC had a grip on this region, punishing petty criminals, issuing taxes and organizing work crews, all under the threat of violence. They also commonly recruited young people.

In 2016, when the FARC signed the peace deal and demobilized, its fighters left in a fleet of boats on the Guayabero River.

In Danna’s town, not far from Puerto Cachicamo, a giant FARC poster now hangs above the main strip. In the restaurant run by her grandmother, FARC recruitment posters sit on every table.

“Join the FARC,” they read. “Come with us in this war of the world’s poor against the world’s rich.”

Mr. Montilla said the dissidents left the fliers, and no one has dared to take them away.

In signing the 2016 peace deal, the government agreed to bring aid to vast swaths of the country, raising hopes in Puerto Cachicamo, said the president of the town council, Luis Carlos Bonilla. But the help never arrived, at least not in the quantity needed.

Disillusioned, dozens of young people in the Guayabero region have joined the insurgency since the peace deal was signed, he said.

Recruiters often sell adolescents on the opportunities they claim to provide: access to firearms, computers, a mission.

Sometimes parents kiss their children good night and then wake to find them gone.

The last time Mr. Montilla saw his daughter was Jan. 1, he said. Danna, who turned 16 in October, was an aspiring journalist who had begun working with Voces del Guayabero, a group of citizen documentarians.

Just as the pandemic began, the government had stepped up coca eradication in the area, prompting protests from locals who saw their livelihoods in danger. Cameramen from Voces rushed to the scenes.

As the military clashed with protesters — shooting several civilians during different encounters — Danna sat in a small shop, one of the few places in Puerto Cachicamo with reliable electricity, editing the videos and uploading them to the internet over a feeble connection.

“But her desire was to be with us in the field,” said Fernando Montes Osorio, a cameraman with Voces who was shot in one clash, leaving his hand permanently mangled.

Because Danna was young, he kept her in the editing room, he said. But they spoke often. “She was focused on the idea that things had to change.”

Then one day in January, she disappeared.

Her father said he believed the violence she witnessed had driven her to the guerrillas — and that her death was likely to create more anger, pushing other young people to join the fighters.

“The armed groups are going to be strengthened more and more by all this repression,” he said. “If we don’t create change, if there is no investment, no other vision for our sons and daughters, we are going to fill our cemeteries with children.”

This was not the first time since the peace accord that the government has killed minors in a military operation.

The bombing of another FARC dissident camp in 2019 led to the deaths of eight children and adolescents. Guillermo Botero, then minister of defense, was forced to resign months later, after an opposition senator revealed that he had hidden the victims’ ages from the public.

The scandal was a major test for newly installed President Ivan Duque, a conservative whose party vociferously opposed the peace deal.

His critics say his post-accord strategy focuses too much on taking out big-name criminal leaders, and not enough on implementing social programs that were supposed to address the root causes of the war.

A total of 12 people died in the operation this month, and it’s still unclear how many of them were minors.

The bombing killed 10 people, according to the military, while two died in confrontations afterward. Most of the dead identified so far by the national medical examiner’s office are between the ages of 19 and 23.

Once Yeimi Sofia’s funeral procession arrived at the cemetery, her mother, Amparo Merchan, insisted on seeing her daughter one last time. Reluctantly, a neighbor opened the casket and cut through the layers of plastic in which officials had wrapped her remains.

The town sat silent before the girl’s ravaged body. Soon, Yeimi Sofia’s sister, Nicol, 11, began to wail. Neighbors urged her to be strong for her mother.

Later, one of the town teachers said the school staff had not dared put together an anti-recruitment program. To do so, the teacher said, would turn them into “cannon fodder” for the rebels.

It’s unclear whether the March bombing was legal, said Rene Provost, a professor of international law at McGill University.

Under international law, children who join an armed group can become combatants, and can therefore be legally attacked by governments.

But the law also requires state actors to investigate whether minors are present at a particular target, and if they are, to search for alternative strategies that might spare the children, or to consider whether the value of the target is high enough to justify the deaths of adolescents.

“Humanitarian law imposes a duty to exercise restraints in attacks against child soldiers,” he said, “and if such duties were ignored, it opens the door for criminal accountability for those who took the decisions.”

In the most extreme circumstance, if a government fails to investigate and punish those responsible, such a case could be taken up by the International Criminal Court.

In an interview, defense minister Diego Molano said that the attack fit within the parameters of international law.

He declined repeatedly to say whether the military knew if minors were present at the camp, adding that it was generally “very difficult” to determine the ages of people present at a military target.

But he has also said that the presence of children would not necessarily stop such an operation.

“What criminals like Gentil Duarte have to take into account is that they cannot continue to recruit young people and hope that this will limit the use of the legitimate force of the state,” he told the newspaper El Espectador. “Children must be protected when appropriate, but force must also be used.”

In Puerto Cachicamo, Custodio Chaves, 34, has not seen his daughter Karen since she disappeared two years ago, at 13.

Mr. Chaves said she was recruited by the FARC dissidents. Since the March attack, he has been consumed by worry.

“Is my daughter hurt?” he asked. “Did she suffer or not? Was she destroyed by a bomb? Is she in pieces?”

He doubts the government will ever tell him.

After “thousands and thousands of lies,” he said, “it’s impossible to believe them.”