Dozens Gunned Down in ‘Day of Shame’ for Myanmar

The killings took place on a holiday honoring the army. A dissident called it “a day of shame for the armed forces.”,

Children and bystanders were among the dozens shot and killed in Myanmar on Saturday as the security forces cracked down on protests against the February military coup. On the same day, a parade honored the army. 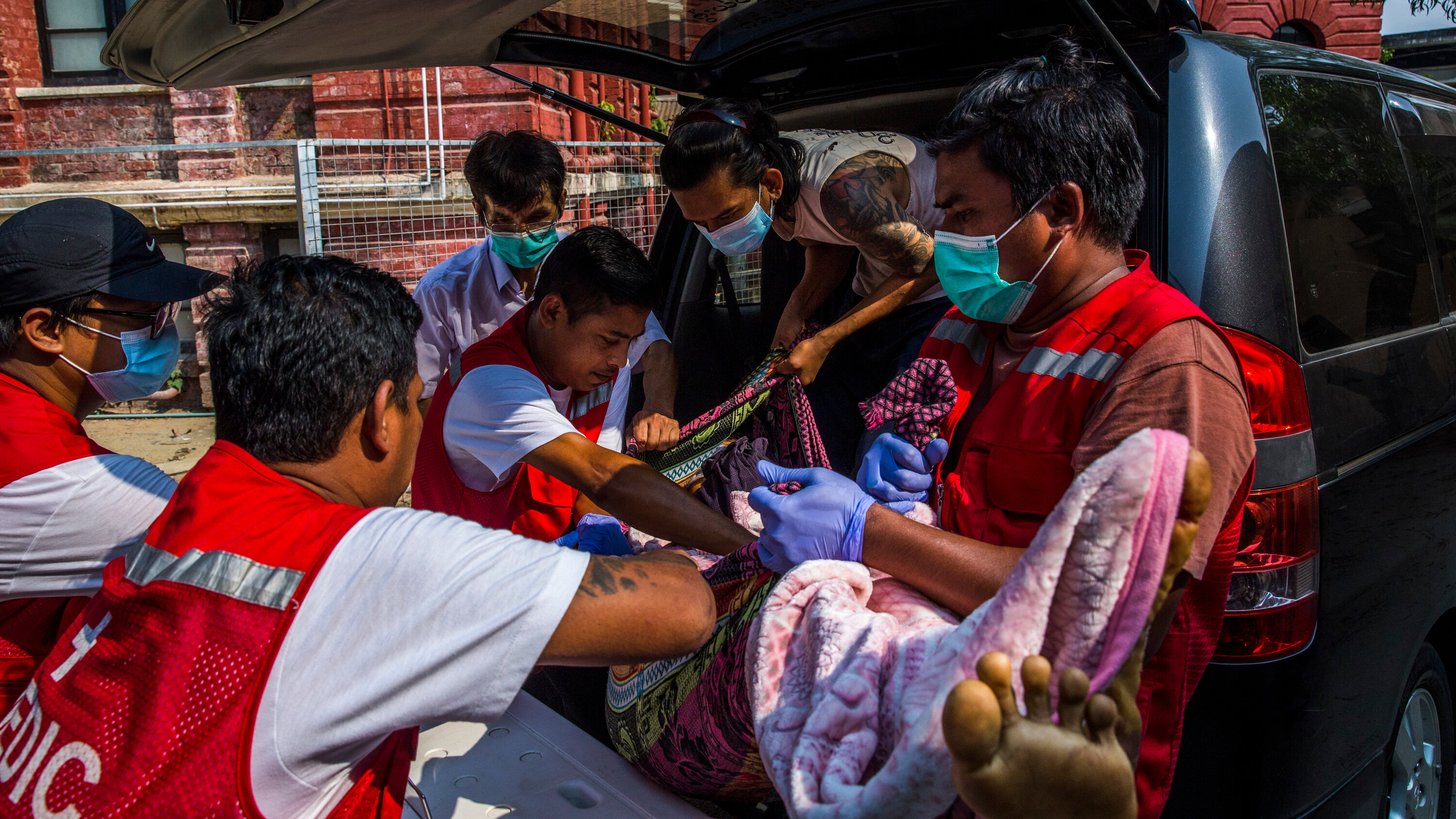 Children and bystanders were among the dozens shot and killed in Myanmar on Saturday as the security forces cracked down on protests against the February military coup. On the same day, a parade honored the army.CreditCredit…The New York Times

Ahead of an important holiday, Myanmar’s military warned people not to come out to protest on Saturday or they would be shot “in the back” or in the head.

But turn out they did, and they were met with brutal force, with at least dozens killed, and perhaps more than 100, in what was one of the worst days of violence in the country since the Feb. 1 military coup.

Many of Saturday’s victims were bystanders not taking part in the demonstrations. Among those shot and killed were a 5-year-old boy, two 13-year-old boys and a 14-year-old girl. A baby girl in Yangon, Myanmar’s largest city, was struck in the eye with a rubber bullet, although her parents said she was expected to live.

Since the nationwide street demonstrations against the coup began, the military has killed more than 300 of its citizens and imprisoned thousands more.

“Today is a day of shame for the armed forces,” Dr. Sasa, a spokesman for a group of elected officials who say they represent Myanmar’s government, said in a statement. The killings also drew worldwide condemnation, including from the United States, Britain and the European Union.

The deadly violence on Saturday took place on Armed Forces Day, a holiday honoring the Tatmadaw, as the military is known. At a military parade on Saturday in Naypyidaw, the capital, the general who led the overthrow of Myanmar’s civilian government last month said the army was determined “to protect people from all danger.”

Senior Gen. Min Aung Hlaing promised to pave the way for democracy, despite having rejected the results of the country’s Nov. 8 election and arrested many of those who were elected to Parliament that day. He reiterated a pledge to hold new elections, but offered no timetable.

Among more than 3,000 people who have been detained by the military since the coup are the ousted civilian leader, Daw Aung San Suu Kyi, and the president, U Win Myint. Their party, the National League for Democracy, won by a landslide in November.

In his speech to the assembled troops, which was broadcast on national television, General Min Aung Hlaing noted that the Tatmadaw was founded by Gen. Aung San, a national hero. He did not mention that the general was Ms. Aung San Suu Kyi’s father.

The Armed Forces Day ceremony, a highlight of the year for the Tatmadaw, is usually attended by a slew of foreign diplomats. This year there were fewer, representing China and several other neighboring countries.

Also present was Russia’s deputy defense minister, Alexander Fomin, who was singled out for praise by General Min Aung Hlaing. On Friday, the general gave Mr. Fomin a medal and a ceremonial sword.

Russia has been an important supplier of weapons to the Myanmar military, and as a permanent member of the United Nations Security Council it can be counted on, along with China, to block any attempt by the international body to impose sanctions on Myanmar.

The United States said on Thursday that it was putting its own financial sanctions on two military-owned conglomerates that control a large segment of Myanmar’s economy.

On Saturday, the United States ambassador to Myanmar, Thomas Vajda, said the security forces were “murdering unarmed civilians, including children,” and he called the bloodshed “horrifying.”

The United States Embassy said shots had been fired at its cultural center in Yangon, the American Center, on Saturday. The embassy said that no one was hurt and that it was investigating.

In an apparent blow to the military on its holiday, the ethnic rebel group known as the Karen National Union said that it had overrun and seized a Tatmadaw camp, killing 10 soldiers. The group posted on Facebook photos of weapons it said it had seized, including what appeared to be machine guns and rocket-propelled grenades.

On Saturday night, the Tatmadaw launched an airstrike against a village in a territory controlled by the Karen National Union near the border with Thailand, the rebel group said. A spokesperson for the Karen Peace Support Network, a civil society group working in the area, told Reuters there were reports that two people had been killed and two wounded, but communication was difficult in the remote region and more casualties were feared.

The Tatmadaw has fought for decades with various ethnic groups in Myanmar, including the Karen. Some opposition leaders hope that urban protesters, who are mainly from the majority Bamar ethnic group, can build a coalition with the ethnic groups to resist the Tatmadaw.

The widespread killings on Saturday came a day after military-run television threatened protesters with being “shot in the back and the back of the head” if they persisted in opposing military rule.

According to the Assistance Association of Political Prisoners, which has tracked arrests and killings since the coup, about a quarter of those killed before Saturday were shot in the head.

The killings on Saturday took place in more than two dozen cities across the country. Many of the victims were bystanders.

In Meiktila, a city in central Myanmar, 14-year-old Ma Pan Ei Phyu was at home when the security forces began shooting randomly in the neighborhood, said her father, U Min Min Tun. The family did not hear a shot, and they didn’t realize that she had been killed until she fell to the floor. She had been hit in the chest.

In Yangon, 13-year-old Maung Wai Yan Tun was playing outside when the police and soldiers arrived. Scared, he ran away and was shot, his mother told the online news outlet Mizzima. The family went to recover his body, but finding it surrounded by security forces, they dared not approach.

“Today’s killing of unarmed civilians, including children, marks a new low,” Britain’s foreign secretary, Dominic Raab, wrote in a Twitter post on Saturday. “We will work with our international partners to end this senseless violence, hold those responsible to account, and secure a path back to democracy,”

One of the bloodiest incidents took place in Dala Township near Yangon. On Friday afternoon, the police arrested two protesters at their home.

Soon after, neighbors gathered outside the police station and demanded their release. The police responded by firing rubber bullets and stun grenades at the crowd, one witness said.

The residents retreated but returned to the police station after midnight. This time, after a lengthy standoff, the security forces opened fire with live ammunition. At least 10 people were killed and 40 injured.