The director of the Shin Bet, Nadav Argaman, made a rare public appeal amid fears that a new round of turmoil might disrupt attempts to form a new government.,

The security forces fired stun grenades at demonstrators rallying in East Jerusalem in support of several leading Palestinian activists who were arrested in the area on Sunday. 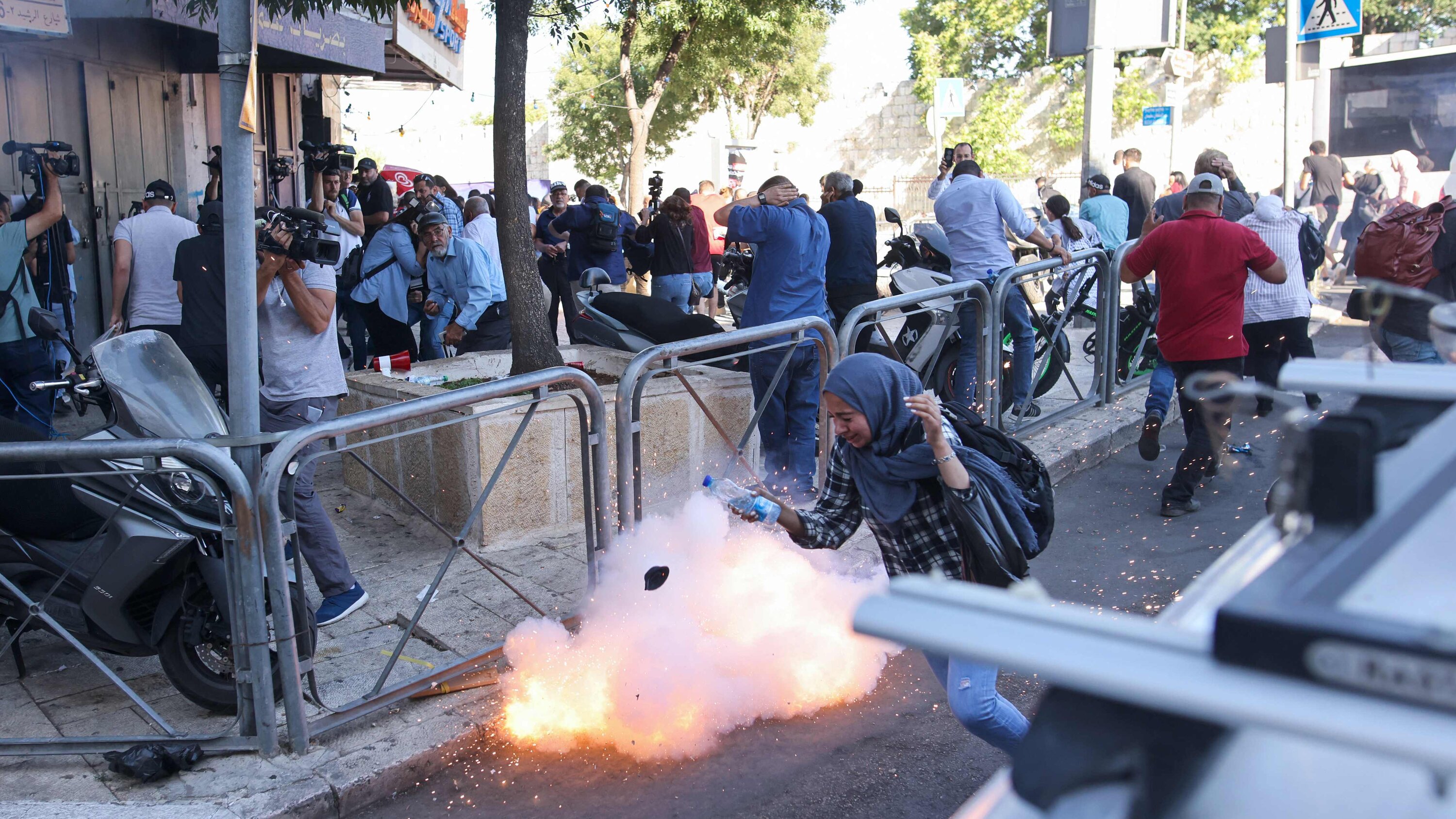 The security forces fired stun grenades at demonstrators rallying in East Jerusalem in support of several leading Palestinian activists who were arrested in the area on Sunday.CreditCredit…Ahmad Gharabli/Agence France-Presse — Getty Images

JERUSALEM — Fears of renewed unrest in Israel heightened over the weekend, leading the country’s internal security director to issue a rare public warning about what he called rising levels of incitement following rightist efforts to derail progress toward a new coalition government.

Far-right Jewish activists announced plans for a provocative march through Palestinian neighborhoods of Jerusalem while, adding to the tensions, the Israeli police on Sunday detained a pair of Palestinian siblings whose activism and media appearances recently drew a wave of international attention to the displacement of Palestinians from East Jerusalem, forming the backdrop to the recent conflict in Gaza.

The events raised the specter of a new wave of turmoil in Israel and the occupied territories, just days before the Israeli Parliament is expected to hold a vote of confidence in a fragile new government whose formation would force Prime Minister Benjamin Netanyahu to leave office for the first time in 12 years.

The new coalition is formed from eight ideologically diffuse parties drawn from the far left to the hard right and would include, for the first time in Israeli history, an independent Arab party.

Supporters of the coalition fear that further political turbulence might prompt some of its hard-right members to drop out at the last minute, by fanning concerns among some ultranationalist members about serving with leftists and Arabs. Negotiations to form the coalition nearly collapsed during the recent Gaza conflict for similar reasons.

In recent days, Mr. Netanyahu and his right-wing supporters piled pressure on ultranationalist members of the coalition, attempting to persuade them to reverse course by accusing them of betraying the country. Mr. Netanyahu’s party, Likud, published the private address of a leading coalition lawmaker. And hundreds of right-wing protesters picketed the homes of several wavering coalition members.

Some analysts and commentators have compared the atmosphere to the time preceding the assassination of Yitzhak Rabin, the former prime minister who was killed by a Jewish extremist in 1995 after leading peace negotiations with the Palestinians.

Against this background, Nadav Argaman, the director of the Shin Bet, Israel’s internal security service, made a rare public intervention on Saturday night, warning of discourse that is “liable to be interpreted by certain groups or by individuals as one that permits violent and illegal activity that is liable, heaven forbid, to reach mortal injury.”

Without mentioning any politicians directly, Mr. Argaman added: “It is our duty to come out with a clear and decisive call to stop immediately the inciting and violent discourse. The responsibility for calming spirits and reining in the discourse rests on all of our shoulders.”

The police have assigned escorts to four of the seven members of the main ultranationalist party in the coalition, Yamina, most recently on Sunday morning.

On Sunday, Mr. Netanyahu appeared to respond to Mr. Argaman at a meeting for Likud lawmakers. He condemned incitement, but warned against curbing free speech and lamented provocations against his own family.

The febrile environment was compounded by renewed plans by far-right groups to march through Palestinian parts of Jerusalem on Thursday. The march has yet to be sanctioned by the police, but if it goes ahead it may coincide with the confidence vote in Parliament.

The march was originally scheduled for last month, but was aborted when Hamas, the militant group in the Gaza Strip, fired rockets toward Jerusalem, starting an 11-day conflict with Israel.

Hamas specifically cited the march as one of several justifications for its initial rocket attack. Some fear that the rescheduled march might encourage a similar reaction, or at the very least foster an environment in which it will be even harder for ultranationalist lawmakers to break with Mr. Netanyahu.

Tensions increased further on Sunday as the Israeli police detained several leading Palestinian activists in East Jerusalem — including Mona and Mohammed el-Kurd, 23-year-old twins who attained global prominence in the buildup to the war by raising awareness about attempts to evict them from their home in favor of Jewish settlers. Both were released after several hours, following an international outcry about their detention.

The plight of their neighborhood, Sheikh Jarrah, became a rallying cry for Palestinians across the world, and was also among the factors that Hamas said prompted its militants to fire rockets toward Jerusalem. The police also arrested a third leading activist, Zohair Rajabi, a community leader in Silwan, another Palestinian neighborhood where hundreds of residents are under threat of forced eviction.

A television reporter for al-Jazeera, Givara Budeiri, was also detained for several hours on Saturday evening while covering a protest in Sheikh Jarrah, prompting an outcry from free speech groups.

Biden Vows to Fight Omicron With ‘Science and Speed’