The Consumer Price Index showed the strongest year-over-year reading since 2008, and a core index popped the most since 1992.,

Consumer prices rose in May at the fastest rate since 2008, a bigger jump than economists had expected and one that is sure to keep inflation at the center of political and economic debate in Washington.

The Consumer Price Index surged 5 percent in May from a year ago, the Labor Department said on Thursday. Economists had expected an increase of 4.7 percent. Prices rose 0.6 percent from April to May, and an index that excludes volatile food and energy costs rose 3.8 percent from a year earlier, the briskest pace since 1992.

Prices are rising for many goods and services, as varied as airfares and used cars, the result of bottlenecks and strong consumer demand as a pandemic-stricken economy comes roaring back. Government officials and many economists have said much of the jump is likely to fade with time as the economy gets past a reopening bounce and supply catches up. The annual number in particular is getting a boost from what’s called a base effect: The year-ago figure was depressed by shutdowns, so the current readings look large by comparison.

Index from a year prior

Some of May’s jump can be explained through

significantly last spring, so the increase now from

the year prior is larger. 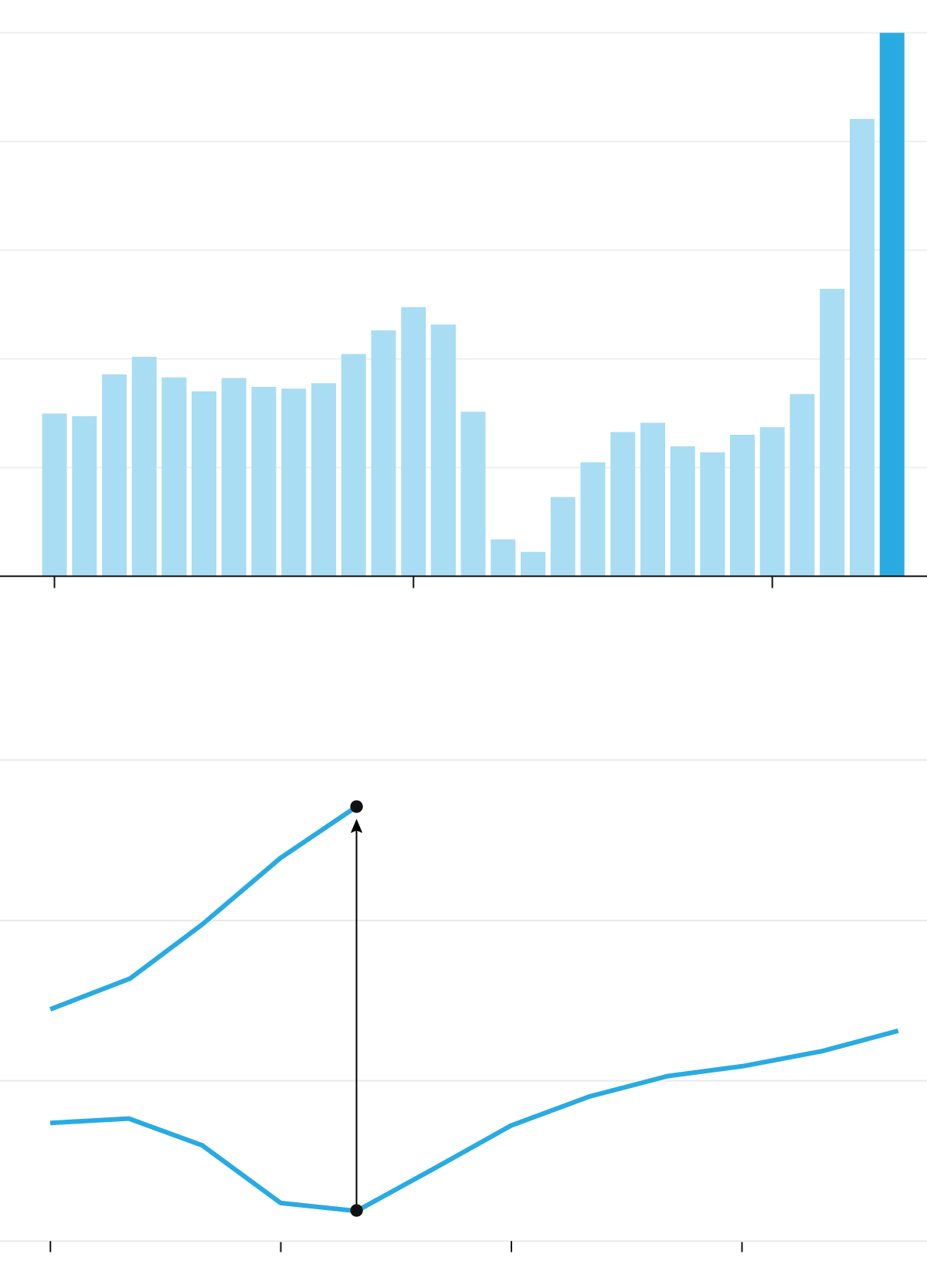 Index from a year prior

fell significantly last spring, so the increase now from the year prior is larger.

But the big monthly figure for May, on the heels of a sharp rise in April, showed that prices have been moving up quickly for more than just technical reasons. The critical question is whether those stronger-than-expected price pressures are a transient trend tied to reopening or something more persistent.

“We are at peak heat, this is the moment,” said Julia Coronado, founder of the research firm MacroPolicy Perspectives. “We know we’ll get a fade — the question is, how big is the fade?”

Ms. Coronado, like many economists, expects inflation to settle down and remain in line with the Federal Reserve’s 2 percent average goal over time. The Fed uses a different index, the Personal Consumption Expenditures measure, to define its target. That gauge is closely linked to C.P.I., though it tends to run slightly below it.

The stakes are high on both Wall Street and Main Street. Inflation can erode purchasing power if wages do not keep up. A short-lived burst would be unlikely to cause lasting damage, but an entrenched one could force the Fed to reduce its support for the economy, potentially tanking stocks and risking a fresh recession.

Washington’s next policy steps could also hinge on what happens with prices. Republicans are using the numbers to argue that big spending on pandemic relief, along with additional spending on infrastructure, which the administration proposes paying for largely with tax increases, would be imprudent.

The government’s debt pile is already at record levels. The Treasury Department said on Thursday that the federal budget deficit hit $2.1 trillion for the first eight months of the fiscal year in May, the highest ever. That is a 10 percent increase from 2020 and reflects the government response to the pandemic, including stimulus payments and funds for state and local governments. The monthly deficit in May was $132 billion, a decline from a year ago, when tax payments were delayed until July.

The White House does not see inflation as a reason to temper its infrastructure and jobs proposals, a senior administration official said, since that spending would roll out over several years and involve longer-term investments. The administration also took solace in the market reaction to the new price data, which it saw as a sign that the pickup is widely expected to be temporary.

Investors were unmoved by the inflation data, suggesting they had already penciled in higher prices and did not think the data fundamentally changed the outlook for Fed policy. Yields on 10-year government bonds, which have been particularly sensitive to concerns about inflation, fell by Thursday afternoon, while the S&P 500 gained 0.5 percent, crossing above its May 7 closing high.

Outside of the base effect, the recent pop in consumer prices has been driven by two big trends. The economy is reopening from a global pandemic shutdown for the first time, and critical materials are in short supply as manufacturers try to ramp up production. Many households are also flush with cash to spend after multiple stimulus checks and months in lockdown, and that has been goosing consumer demand.

The 29.7 percent annual increase in used car prices reported for May is among the more striking examples of how bottlenecks are causing inflation. Demand for cars — used and new — is outpacing supply in part because of a global shortage of semiconductors that has hobbled vehicle production.

That chip shortage, which arose from factory shutdowns during the pandemic and one-off problems like a drought in Taiwan, could take time to resolve but it should prove to be temporary. In a sign that companies are finding a way to adjust to the global shortage, General Motors said earlier in June that it would start to increase shipments of pickup trucks and other vehicles to dealers.

Airfares demonstrate another trend. Few people were flying for vacation or work last spring, depressing prices. As people return to the skies, the data shows a big surge in prices, even though that particular price index has yet to fully return to its pre-pandemic level.

Such effects should fade with time. Economists are instead parsing the data for signs that price increases will prove longer lasting. For example, two measures of housing costs that make up a big share of the inflation reading, but which move slowly, shot higher in May. Economists pay close attention to those metrics — rent and what’s known as owners’ equivalent rent, which tries to capture how much owned houses would cost as rentals.

“We are getting an earlier rebound than what we were envisioning — that’s significant,” said Laura Rosner-Warburton, also a founding partner at MacroPolicy Perspectives, speaking on the same call as Ms. Coronado. But Ms. Rosner said she also expected the pressures on other goods and services prices to fade.

Yoram Weinreich, a founder of a furniture company called Simpli Home that sells dining room tables and T.V. consoles both direct-to-consumer and via online retailers like Wayfair and Amazon, has already raised prices this year. He said he was planning a “mid-double-digit” increase — around 15 percent for some products — in the coming months.

The pandemic era has been a wild ride for Mr. Weinreich. He had expected demand to slump last spring but it surged instead, as consumers stuck at home and with stimulus funds in their pockets bought furniture. Factories in Asia and Brazil couldn’t keep pace with the burst of new orders. Now, international shipping costs have skyrocketed, and it’s hard to get containers at any price.

“It was getting used to the new demand, then it was factory capacity, and now you can’t get containers,” he said, explaining that he expects prices to remain elevated at least through the Chinese New Year in February, thanks to the shipping cycle. “Consumers are going to have some massive sticker shock in the short term, and how much will it come down?”

Mr. Weinrich isn’t alone in raising prices. Chipotle said this week that it would pass on higher labor costs, charging slightly more for its menu offerings. The consumer goods company Procter & Gamble has said it will charge more for its products, as varied as tampons and diapers.

The debate will now center on whether price increases will slow to a more normal rate over time, as the Biden administration and top Fed officials predict, or if they will remain too high, as Republicans warn.

“This is the largest year-over-year increase in prices since the Great Recession, and massive stimulus spending is a contributing factor,” Senator Mike Crapo, Republican of Idaho, wrote on Twitter. “Proposals for further federal spending, coupled with job-killing tax hikes, are not the remedy for economic recovery.”

The White House has been focused on alleviating bottlenecks where it can, reviewing the supply chain for semiconductors and critical minerals used in all sorts of products. But controlling inflation falls largely to the Fed.

The central bank’s June meeting is next week, which will give the Fed chair, Jerome H. Powell, another opportunity to address how he and his colleagues plan to achieve their two key goals — stable prices and full employment — in the tricky post-pandemic economic environment.

“The Fed has never said how big a reopening spike it expected, but we’re guessing that policymakers have been surprised by the past two months’ numbers,” Ian Shepherdson, chief economist at Pantheon Macroeconomics, wrote in a note following the release.

The immediate policy question facing the Fed is when, and how quickly, it will begin to slow its $120 billion in monthly government-backed bond purchases. That bond-buying, which started at the height of the pandemic, is meant to keep borrowing of all kinds cheap and stoke demand. Because it bolsters stock prices, markets are very attuned to when central bankers will taper it.

Mr. Powell and his colleagues have repeatedly said that they need to see “substantial” further progress toward maximum employment and stable inflation that averages 2 percent over time before they pull back from that policy.

A “number” of officials at the Fed’s last meeting said that it might soon be time to begin discussing a policy change, and the inflation figures are another data point likely to ramp up pressure to get moving sooner rather than later.

“I don’t think there’s anything in this data that is going to threaten the Fed’s baseline view that this will prove transitory,” said Krishna Guha of the research firm Evercore ISI. Still, the Fed is likely to start a discussion on tapering.

“You don’t want to bet the farm that if we go through another three, four, five of these serial upside surprises” that expectations for inflation will remain tempered, he said. It’s “an insurance policy.”

The Fed could also lift interest rates, which are near zero, to help to control inflation if higher prices prove especially troublesome.

Both cutting bond buying and lifting rates would make paying interest on the government’s big debt pile more expensive — and while that is unlikely to be a direct consideration for the Fed, which is politically independent, it could influence how much the government is willing to spend and borrow in the future.