Solar Eclipse 2021: Highlights From the ‘Ring of Fire’

Weather and geography made it difficult to see the rare spectacle, but some intrepid people got an exciting view of the eclipse from unique vantage points.,

This article is developing with more reports on eclipse viewing from assorted locations.

Every couple of years or so somewhere on Earth, the wanderings of our planet, the sun and the moon cause them to line up like billiard balls on a velvet space table. Seeing worlds disappear behind each other in an eclipse can make you cry or scream. But getting to that point frequently takes hard work, and maybe even a bit of luck.

That turned out to be as true for Thursday’s eclipse as it has been since humans started chasing these celestial occurrences.

Just after sunrise over the eastern half of North America, the sun was almost completely blotted out by the moon for a few dawn hours in an annular solar eclipse.

During such an eclipse, the black silhouette of the moon — too far from Earth to completely cover the sun — will be surrounded by a thin ring of our home star’s surface, or photosphere. Many know this as a “ring of fire,” but few will get to experience the full effect.

The eclipse started after sunrise north of Lake Superior and began crossing remote regions of Canada, on its way into Greenland and the Arctic Ocean before going over the North Pole. Its course then heads south before ending in parts of the Russian Far East.

Still, some lucky souls got to experience this cosmic geometry, and a few were even intrepid and well organized enough to book airplane flights into the zone of maximum darkness. Many more of us got to experience a partial solar eclipse if we woke up early to clear enough skies.

Begging the clouds to part.

Clouds hung on the horizon in Manhattan at sunrise, but they didn’t interfere with the enthusiasm of about 25 guests who had begun arriving at the Empire State Building at 4:30 a.m. on Thursday.

It was dark and windy as the visitors spread out across the 86th floor observation deck 1,050 feet above midtown, adjusting camera lenses and perfecting positions as they waited for the sun to appear.

When the sky began to lighten and clouds turned shades of fuchsia pink, attendees of the event, who had paid $114.81 each to be there, could be overheard begging the skyline to clear up so there would be a better view.

Everyone’s eyes were trained on a patch of horizon between two other iconic skyscrapers — the MetLife Building and the Chrysler Building.

Finally, the sun rose and the eclipse was visible — if a little hazily — through the cloud cover.

“You could hear the entire audience react at the first viewing of the sun,” said Jean-Yves Ghazi, president of the Empire State Building Observatory. “Everybody was gasping and it was absolutely magical.”

While some went vertical in New York, others left the city in the hopes of getting a better view of the eclipse.

Early on Wednesday, Mike Kentrianakis, a lifelong eclipse chaser, arrived at a Greece, N.Y., inn near the shores of Lake Ontario. He had originally helped to organize an event for an eclipse watch on Randalls Island in New York City. But clouds in the forecast motivated him to make a seven-hour drive in search of fairer skies upstate.

At sunrise on Thursday, he was planning to watch the tips of shrouded sun emerge above Lake Ontario.

Jay Pasachoff, an astronomer at Williams College, has chased eclipses all over the world and wasn’t planning to miss this one.

He, his wife, Naomi, and another 30 or so people boarded a three-hour Delta flight out of Minneapolis into the darkness and back. The trip was sponsored by Sky and Telescope magazine and led by Kelly Beatty, a senior editor of the magazine.

Seats on the plane went for up to $3,100 according to a price list.

The plane flew to 39,000 feet and was 5,000 feet above the clouds, giving the Pasachoffs and their fellow passengers a lengthy view of the eclipse.

“We were able to see the eclipsed sun for about a half hour, with four and a half minutes in which we saw the bright ring around the black silhouette of the moon,” he wrote in an email.

He added that it was the 73rd solar eclipse and the 19th annular one he had seen.

The ring of fire was visible across a narrow band in the far northern latitudes, starting near Lake Superior in Ontario, Canada, at sunrise, or 5:55 a.m. Eastern time. It then crossed Greenland, the Arctic Ocean and the North Pole, ending in Siberia at sunset, or 7:29 a.m. Eastern time.

Outside of that strip, observers could see a crescent sun, or a partial solar eclipse. The closer they were to the centerline, the more of the sun was gone. At about 5:32 a.m. in the New York metropolitan area, the sun was 73 percent obscured, according to Mr. Kentrianakis, who was the Eclipse Project Manager for the American Astronomical Society during the big eclipse in 2017. 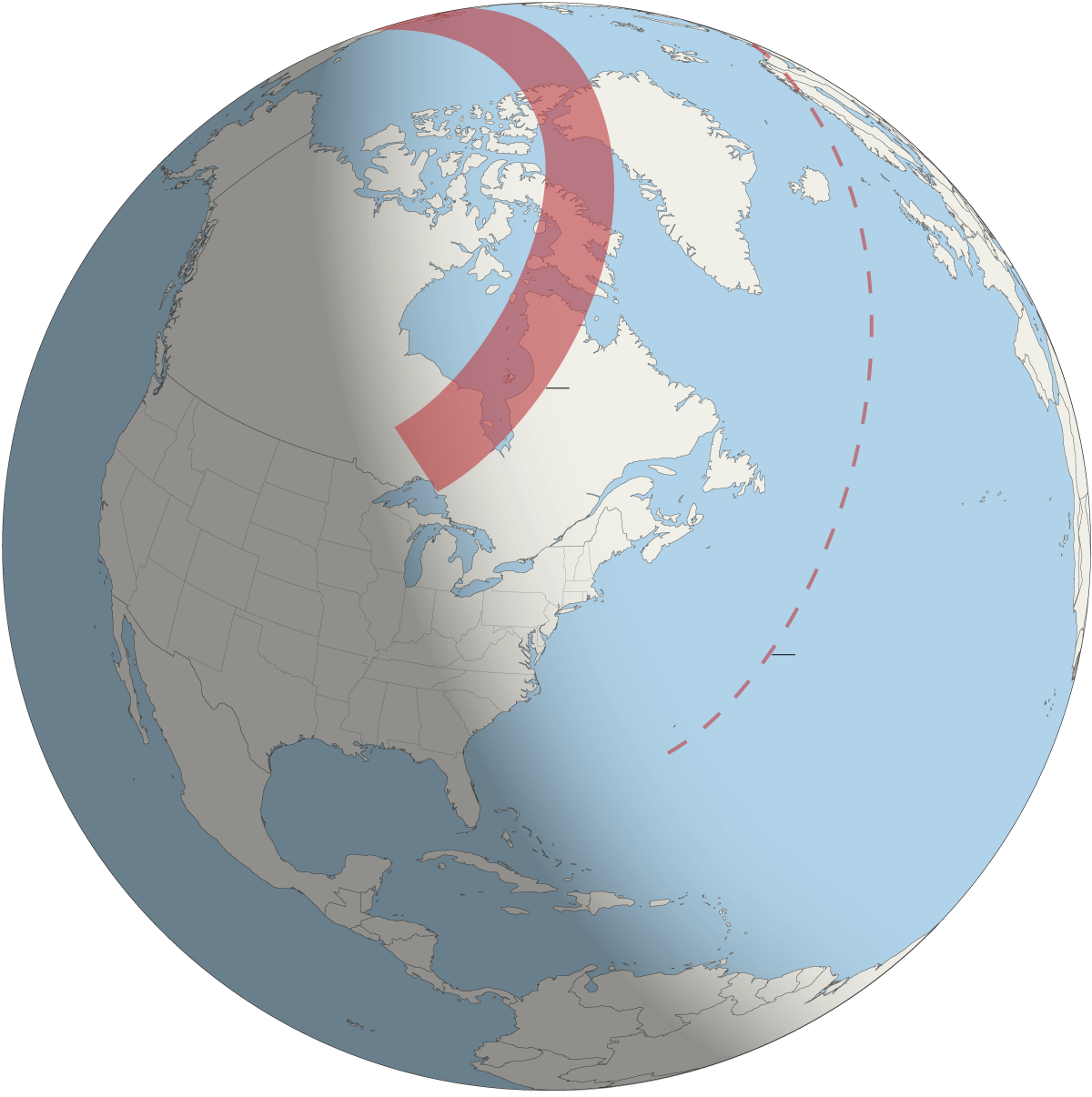 Line where 60% of the sun’s diameter will be covered by the moon. 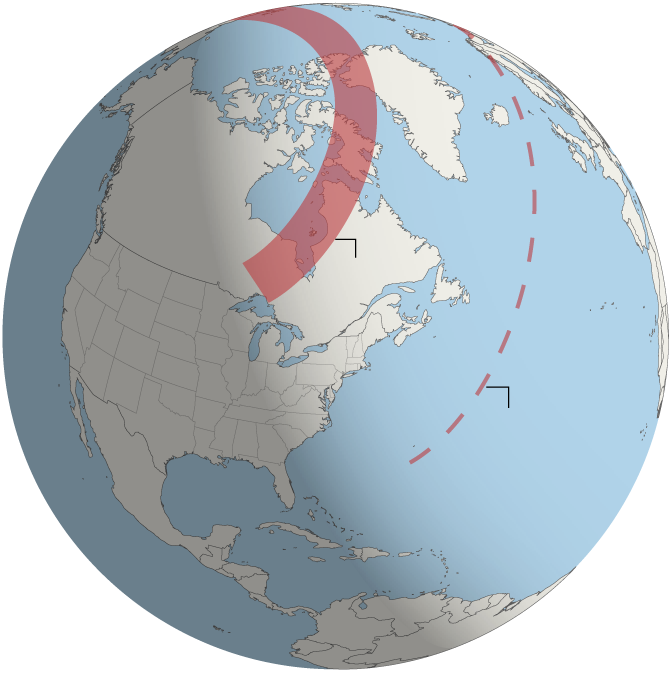 Line where 60% of the sun’s diameter will be covered by the moon.

Is it safe to look at a partial solar eclipse, or an annular one?

No. Unless you’re wearing special protective glasses, it’s never a good idea to look directly at the sun, even if it is partly or annularly eclipsed.

Exposure to intense light from the sun during an eclipse can cause injuries to your retinas that may not heal. Such damage can lead to permanent vision loss, depending on how much exposure you experience.

To keep safe, wear eclipse glasses while viewing the eclipse. Not sunglasses — eclipse glasses, like the ones you may have shoved in a drawer after 2017’s “Great American Eclipse.”

If you want to be more prepared next time there’s a solar eclipse in your vicinity, here’s a list of reputable vendors from the American Astronomical Society. And if you can’t get any glasses or other filtering viewers, there are other things you can do, like make a pinhole projector at home with cardboard or a paper plate. Here are some instructions.

The path of annularity in Canada traveled through many places that would have been complicated to visit in normal times. Covid-19 restrictions made that even more difficult, and large groups were not advised to travel and gather in Ontario and Quebec.

“We’re just encouraging people to safely view it as individuals and in their social bubbles,” and to remain at home or in a safe place, said Mike Reid, public outreach coordinator for the Dunlap Institute for Astronomy & Astrophysics at the University of Toronto.

While these requirements are a stark contrast to the situation in 2017, when huge crowds gathered across North America to watch the total solar eclipse, Dr. Reid said there was a silver lining: The pandemic prompted the institute and colleagues at Discover the Universe, an astronomy training program based in Quebec, to ship 20,000 eclipse viewers to people in and around the eclipse’s path, including in Nunavut, a Canadian territory whose population is primarily Inuit.

“Because they are in quite remote locations, we wanted to make sure they would have the material to observe it,” said Julie Bolduc-Duval, executive director of Discover the Universe.

Dr. Reid added, “We’re in circumstances, in this pandemic, where everyone is forced to stay at home, but it actually helped bring everyone together on this one particular thing.”

Sudbury, Ontario, is outside the path of annularity but still experienced an 85 percent eclipse of the sun. Olathe MacIntyre, staff scientist at Space Place and the Planetarium at Science North, a museum there, planned to contribute to a livestream of the eclipse on Thursday.

“It’s something we can share apart,” Dr. MacIntyre said.

Preparing for the eclipse in Greenland and Russia.

Pat Smith works in Greenland for Polar Field Services, a company contracted by the National Science Foundation that helps scientists and others plan expeditions in remote parts of the Arctic. Mr. Smith plans to view the eclipse at a site near Thule Air Base, the northernmost American military base, which is about 700 miles from the Arctic Circle.

The site, North Mountain, is within the path of the annular eclipse, which will last for nearly four minutes there, and viewing conditions are expected to be clear. Mr. Smith planned to take photographs during the event.

In Russia, the eclipse will be visible in full only in some of the vast country’s most remote regions to the east, closer to Alaska than to Moscow.

Nevertheless, the Moscow Planetarium plans to set up telescopes allowing residents of the capital to witness the event, although the sun there is expected to be only about 15 percent obscured.

The planetarium in Novosibirsk, the most-populous city in Siberia, will also host a viewing. A local news website in the city reminded residents to protect their eyes if looking at the sun.

How rare is this kind of eclipse?

Annular eclipses are not all that unusual. A “ring of fire” put on a show in the Middle East and South and Southeast Asia in December 2019.

One interesting feature about this eclipse is that it will move north, crossing over the North Pole before heading south. That the eclipse is occurring so far north is explained by its occurrence near the summer solstice, when the northern half of the planet is close to its most extreme tilt toward the sun.

The last time a crescent sunrise eclipse occurred in New York was 1875, Mr. Kentrianakis noted. “And they complained like us about getting up so early,” he said.

What other solar eclipses are coming up?

Solar eclipses happen every couple of years in some inconvenient part of the globe. But a couple are coming up that will be visible in parts of the Americas.

Another annular eclipse will occur on Oct. 14, 2023. This one will start in the Pacific before crossing into the Northwestern United States and working its way toward the Gulf of Mexico. It will cross the Yucatan Peninsula and some Central American countries before finishing up in Brazil.

But if it’s a total solar eclipse you seek, mark your calendars for April 8, 2024. It will be something like a sequel to the Great American Eclipse that crossed the United States from northwest to southeast in the summer of 2017. But this one will be more like a “Great North American Eclipse,” starting in Mexico before crossing over into Texas and working its way northeast until it gets to Canada.

900 Bison at Yellowstone Are Targeted for Removal

Biden, Obama and Other Leaders React to Bob Dole’s Death

The Abortion I Didn’t Have